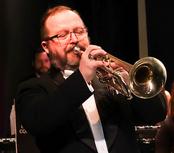 DAN DESROCHERS
Favourite song in the repertoire: Fly Me To The Moon
(originally titled "In Other Words")
​Dan has been involved in music as a hobby for most of his life, managing to include a lot of band time throughout his military career as aircrew on a patrol aircraft.  He started playing music in public at a young age with local bands, the Air Cadets program, and at the Collège Militaire Royal de St-Jean in Québec.  Mostly involved in volunteer bands in Nova Scotia and Ottawa, he played in multiple parades and a variety of ensembles from small jazz combos to full size concert bands.  He is a current member of the Barrhaven Community Concert Band and recently joined the Ottawa New Horizons Band program’s Jazz Band.  In other words, Dan fits in well and we’re happy whenever he’s in the section.

JOHN RENFORTH
Favourite song in the repertoire:  The Stripper
A native of Vancouver, John grew up in the North Vancouver Schools Band under the tutelage of Arthur Smith.  He studied music at the University of British Columbia, and studied trumpet with Ken Hopkins, Bobby Hales, and Don Clark.  John played in many organizations in Vancouver and Edmonton before moving to Ottawa, where he played in Bill Jupp’s band and  beside Joe Trivisonno in the FunKtion showband.   He is currently a member of the Centralaires Concert Band.  John cites Maurice Andre, Pops, Chet Baker, Miles Davis, Raphael Mendez, Allen Vizzutti, and Kenny Wheeler as his major influences.  John enjoys all kinds of music but has a particular love for the dynamic sound and power of the big band.  In his spare time, John is also a jetfighter pilot who thinks “The Stripper” is the best song ever written!

RICK RANGNO
Favourite song in the repertoire:  Ain’t No Mountain High Enough
Rick is one of Ottawa’s most sought-after trumpet players, and his tune selection directly relates to his quest for excellence.  Rick graduated from the University of British Columbia and cites Freddie Hubbard, Miles Davis, Chet Baker and Kenny Wheeler as influences.  Recently retired from the Central Band of the Canadian Forces, he is now working full-time as a freelance trumpet player and teacher.  Rick has a wide range of musical interests, but is particularly enthused when playing kick-ass horn-driven funk and blues à la James Brown and Tower of Power.

ROBERTA (ROBBIE) ARCHIBALD
Favourite song in the repertoire:  I Get A Kick Out Of You
Robbie gets a kick out of her family, music, and teaching.  Originally from Moose Jaw, She studied at the University of Winnipeg and Queen’s, and is now a high school music teacher.  As she likes to say: Great music connects us to something larger than our own existence.”  Robbie is happy to be playing with The Wild Cards, and we hope she’s with us for a long time to come.

TAE KIM
Favourite song in the repertoire:  Baby Face
As the youngest member of the group, Tae has a baby face but is not without a lot of experience.  After arriving from Korea in 2000, Tae graduated from Ottawa’s Canterbury High School of The Arts, where he nurtured his passion for music.  He never stopped playing his trumpet while studying business at university, joining various bands and performing jazz, classical, concert band, and Motown.   His current musical influences are Maynard Ferguson, Arturo Sandoval, Chuck Mangione, and Doc Severinsen and he looks forward to an amazing musical experience with The Wild Cards. 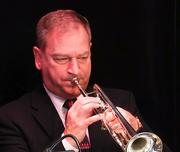 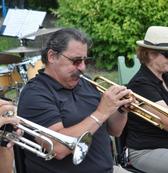 GORD ROWLAND
Favourite song in the repertoire:  Body and Soul
Gord has been making music for as long as he can remember, starting with humming hymns in church before he could read.  He studied piano before moving to trumpet and completing a music degree at the University of Ottawa.  He’s performed with the Ottawa Symphony Orchestra, and the Band of the Governor General’s Foot Guards, and enjoyed five hot summers with the Ceremonial Guard on Parliament Hill.  A former member of the Heritage College Big Band, the Bill Jupp Big Band, and the University of Ottawa Alumni Jazz Band, he currently performs with Big Band Ottawa and the Ottawa Wind Ensemble, and is now unleashing his wild side with The Wild Cards.  Gord’s listening ranges from Renaissance motets – okay, those aren’t so wild – to orchestral greats to Motown to young artists like Jacob Collier. Trumpet favourites include Miles, Dizzy, Freddie, Clifford, Chet, Doc, Guido, Maurice André, Bud Herseth, and Markus Stockhausen. He’s relieved he doesn’t have to lug CDs around now, and prefers to stream music online, although he’s still mourning the death of liner notes. For him, listening to and performing music is like having a time machine, but without having to park it in the winter.

JOE TRIVISONNO
Favourite song in the repertoire:  Born To Be Wild
Born and raised in Montreal, Joe was indeed born to be wild . . . or maybe that should read BORN TO BE A WILD CARD!!!  He enjoys sports and is an avid amateur hockey player, and The Wild Cards is grateful that his teeth and hands are still intact.  After studying trumpet at McGill University, he played with numerous big bands in the Montreal and Ottawa areas before and after touring North America and England for 8 years with an R&B band and recording in New York, London, and Montreal.  This former member of Big Band Caravane and The FunKtion, Ottawa’s premiere Motown, funk and soul showband, now brings his talents and his zest for life to The Wild Cards. 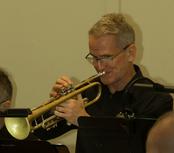 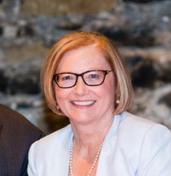 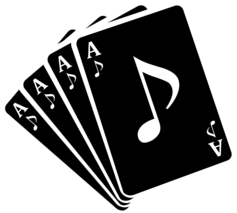 Favourite song in the repertoire:  We're Here For A Good Time
Jean-Pierre has played trumpet in a variety of band types and styles, but his main love is big bands.  From the big band he started at his high school, to playing lead trumpet in Big Band Ottawa and helping out other big bands around Ottawa, J-P loves to play and entertain.  J-P has received several awards and accolades for his contributions to volunteer community and youth music programs.  He has been involved in several music programs and bands in the National Capital Region, Nova Scotia, and Texas.  He enjoys supporting pit orchestras in local high school and local musical theatre productions.  J-P is also a band leader for the Ottawa New Horizons Band program’s Jazz Band, the Music Director of the Barrhaven Community Concert Band, and a member of the award-winning dance band “The Wailin' Hues”.  When he joins The Wild Ones, he – and we – definitely have a good time!